So goes the oft-repeated proverb, but it unfortunately ignores the matter of whether or not the man is question is the least bit fond of fish. Maybe he’s allergic, trying out a new “anti-healthy diet or just doesn’t want the darn tuna. To lather with cliche for a bit longer, we’re told not to look a gift horse in the mouth, but just as often as not, folks seem to do just that.

Perhaps it comes along with the whole, “decadent western civilization thing” or perhaps it’s a component of the perpetually lusty gaze we Americans turn to things we don’t have. Whatever the reason, just because something is beneficial, whether it be a material object or a skill, doesn’t mean that people will want it, even if their personal sacrifice in obtaining said gift is negligible.

Case in point: This show, otherwise titled as "Young Narcisists Want More Sparkly Junk: Why Everyone Under 18 Should be Mailed to Madagascar."

Dan Rather, in an op-ed for The Washington Post, echoed his calls for federal hand in solving the current crisis in the transition from old media (newspapers) to new media (tweets from some girl you hooked up with in sophomore year).

“I want the president to convene a nonpartisan, blue-ribbon commission to assess the state of the news as an institution and an industry and to make recommendations for improving and stabilizing both,” Rather said, obviously equating the quality of his commission to the upstanding quality of Pabst Blue Ribbon.

“Why bring the president into it? Because this is the only way I could think of to generate the sort of attention this subject deserves. Academia and think tanks generate study after study, yet their findings don’t reach the people who need to be reached.”

The problem with Rather’s suggestion, which is actually something I’ve considered advocating, is threefold. First, involving President Obama with anything at the moment is guaranteed to drag said thing into a cesspool of partisan bickering and a subsequent bout of amnesia about what the shouting was about in the first place.

Then, Rather suggests moving the study of the media’s evolution away from the academic sector, which sounds fine and dandy, except by involving the feds, you involve…well…the feds. Not only is the entirety of congress focused on solely on health care (and planes! more planes!), but any sort of government involvement in media at this time could be the most counterproductive way to create a trustworthy relationship between the public and reporters.

“But it worked with the BBC! It’s government-funded and is arguably the most highly-regarded news source in the world!” you may exclaim. While that may be true, the BBC also originates from a radically different time, when the populace was a bit preoccupied with the whole “post WWI fiasco,” along with an approach to free speech that was littered with seditious libel (remember, the monarchy actually mattered back then). To even involve the federal government in something as superficially innocent as a collection of assessments and recommendations on the media raises that damning specter of censorship and further speculation of a liberal bias in the media.

Oh. But that already happened.

On May 6, the Senate Subcommittee on Communications, Technology and the Internet, headed by John Kerry went through interviews with various media figures in a “Future of Journalism Conference” in an ultimately pointless affair that revealed little more than bemused looks from folks such as myself, after hearing David Simon rant and rave against the structure of the newspaper industry (which, although true, is like a horse-and-buggy dealer complaining about managerial inefficiencies during the peak of the Model T’s popularity) in an interview that should have warned me ahead of time not to watch the newspaper-heavy fifth season of the otherwise perfect series, “The Wire.”

Oh, and Arianna Huffington, with her typically pretentious cadence, got to look down snoodily at staunch sentimentalists like Simon from her successful perch atop The Huffington Post.

“The future of quality journalism is not dependant on the future of newspapers. We are actually in the midst of a golden age for news consumers,” she said. “The discussion needs to move from ‘How do we save newspapers?’ to ‘How do we strengthen journalism?’ via whatever platform it is delivered.”

This is, of course, a discussion that bears little importance for The Huffington Post, as though it plays host to the occasional thought-provoking article, the emphasis on boobs and celebrity fluff is clearly the unheralded director of traffic to the site (Apparently Ashley Greene is naked on the Internet, and she’s a vampire or something. Thanks Arianna!). 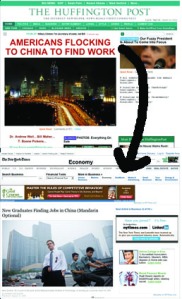 The Huffington Post: Where interesting, prominent stories are just links to The New York Times.

Circling back to the main point, the primary reason that Rather’s suggestion, even though it sounds splendid in theory, is constructed to fail from the very start is that the vast majority of the populace doesn’t want a more factual, unbiased and intellectual media landscape. If it does, then this article, Rather’s article, the Senate hearing nor the tag of Ashley Greene in this post to vainly try and drive up traffic for the blog would exist.