Pastor Eddie Long allegedly coerced a 15-year-old into sex on a trip to Africa. He denied allegations from three other men,along with the one mentioned above.

Eddie Long has been vocal about his stance against homosexuality. 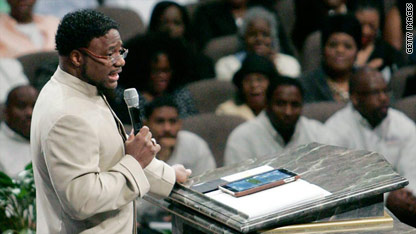 This story is quite similar to the story of Tye Tribbet, a Gospel singer who had an affair with a woman in his traveling performer group. He made a half-hearted apology on a Christian television show, and then told the public that he was attending rehabilitation activities to rebuild his marriage.

What’s more, when his friend, Da Truth tried to council the two, he ended up having an affair with Tye Tribbet’s wife. His transgressions landed him suspended from his label, and scrambling to apologize to his followers and supporters of his music. You can read the announcement here.

I’m just sick of it. I’m sick of famous religious figures a) using their position to force themselves upon trusting followers b) Christian performers spreading messages and ideologies in music they profit from despite committing the very sins they warn against, and c) the message sent to those who known nothing of the faith these perpetrators ascribe to, and use their wrongdoings as a measuring stick in which to judge other innocent believers.(Even worse, those who once believed, but through the abuse rendered, lose all hope in the positive aspects of what should be sacred.) It’s horrible, really.

These liars are ruining more than their reputation. They’re ruining an entire belief system.

Do not enter if scantily clad

She stands on the sideline, chest exposed, shirt revealing a portion of her midriff. From a distance, there is no indication that she is on this field to provide a service to those dependent on her journalistic skills – rather, she could be anyone. Any woman, just standing there, with pride in her stance, and a normal appreciation for those who appreciate her – her body, that is.

Now, it may just be the culture of this Mexican sports journalist to wear form-fitting clothing, allow those around her to partake in her cleavage, or promote her shapely figure. 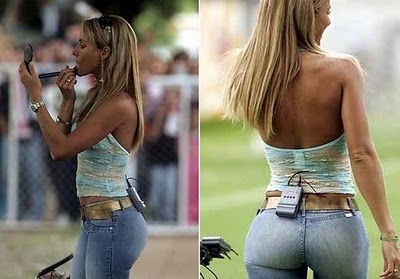 But where is the line between self expression and professionalism? Yes, business employers note that they may be discriminatory toward potential employees if they arrive to an interview without business casual attire. But what of those with tattoos, piercing, or other forms of body art? Are they allowed to refuse their willingness to work by physical judgement alone? No, a tattoo shouldn’t define you, nor should a skin splitting blouse. It’s just pigment in the dermis of the skin, or cotton sheathing the torso. However, it is safe to say that the representation of the company you work for is at stake when you choose to put your own personal expression above company reputation.I doubt the quality of the quotes she receives are the unbiased, unfettered opinions of those she interviews. Her dress distracts subjects from the task at hand, which is to get the story across to the public. That’s it. It’s hard to stay objective about anything when the person you are speaking to is so clearly subjective about the message she is sending with her body.

Despite some language barriers, I seemed to get the sense that her argument in this video

is that she has every right to be sexy – and she does. But do you go to a coctail party in a wetsuit? Do you get married wrapped in Saran wrap? What if they very football payer she came to watch suited up to play their opponents in a three-piece suit? They would be unprepared to say the least. I think the same can be said about her.

Every moment of the pre-show made me cringe. There were constant updates via twitter feed. Who tweeted about Justin Bieber?

What about Lady Gaga? Did anyone ACTUALLY tweet about these people? Lady Gaga was a sight to behold, toting two discharged victims of “Don’t Ask, Don’t Tell,” whom she consistently advocated for throughout the night, especially during her numerous acceptance speeches. At times, I was confused as to whether I was watching a political rally or an awards show, but her attire normally brought me back. There was a wild ‘white’ carpet performance by Will.I.Am (In blackface, no less), with Nicki Minaj, 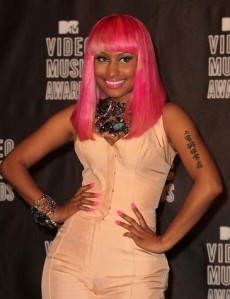 in futuristic, skintight neon colored spandex. Horrible. There was a brief stint of heartfelt satisfaction with Justin Bieber graced the stage in too-low jeans, only to dissapate when the incessant comments of pedophilia were uttered by Chelsea Handler.  Usher seemed well beyond his prime, Jersey Shore cast-mates wore out their welcome (in a hot tub? Really?), and Eminem and Rhianna (both victims and perpetrators of abuse) sang the song that is flowing over airwaves nation-wide. Taylor Swift performed barefoot, Cher came out in a thong and see-through body suit and Lady Gaga, 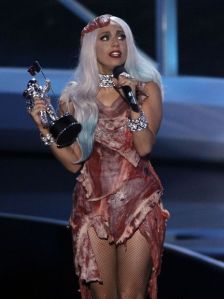 It's a dress made of meat. NBD.

thrust her purse made of meat into her arms while accepting her award, and to finish out the evening, there was Kanye West, in the brightest red suit I’ve ever seen, playing a keyboard like a kindergardener, while calling for toasts to “douchbags”, and “jerk-offs”. 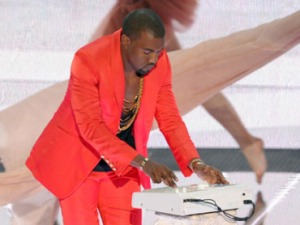 Does that sound like a mess? It certainly was. If you haven’t seen it, make it a priority, if only to scoff in disgust at the mess our pop culture has become. Or don’t. You have better things to do.

Unnecessary, but so, so good

I hope to become a bit more pro-active about not being overly anxious about the end of the world, but it’s news like this that completely throw me for a loop!

Oh and hello. Sorry – I neglected to acknowledge the start of a new school year, and the beginning of new opportunities to read this blog! It’s going to be a good one (year, I mean) – I can feel it in my bones.

Back to the task at hand.

America seems to be infatuated with fluffy, nonsensical, unique feats or small (but invigorating) proportions. For example:

That baby who does the single ladies dance? Over 250 thousand people delighted in that short clip – sometimes repeatedly. Things like that offer welcome respite from the goings of our world – the earthquake that cultivated a new fault line in New Zealand, perhaps?  Or the near miss hurricane Earl  just a few days ago, ruled an emergency by Barack Obama himself? What of the obscene flooding in Pakistan? Or the lack of justice pervading our culture in favor of those with money and time spent in the public eye?

I’ve got nothing against YouTube: people are being educated about things – hey are learning how to improve themselves, and that leads to more informed, confident people. Do you need to know how to make sushi? Done. Are you interested in origami figures? How about how to do the Superman? They are all vital skills to add to your repertoire. Your friends are on YouTube. Don’t be ashamed of the craftiness you cultivate by watching those on the small screen.

It’s our love of the small things – the weird things that don’t have a direct effect on our lives that help dull the sting of the inadequacy, guilt, and sadness we feel while watching he nightly news. Who doesn’t want to know what lies on the other side of the rainbow?